After great success in 2016, Thespiana returned to the Cottonwood Center for the Arts with all-new and original rehearsed readings of "Gray Comedies" for 2017. Playwrights included Mark and Lauren Arnest, Chuck Cabell, Warren Epstein, Phil Ginsburg, and Jeff Schmoyer.

Keeping Up Appearances - written and directed by Jeff Schmoyer 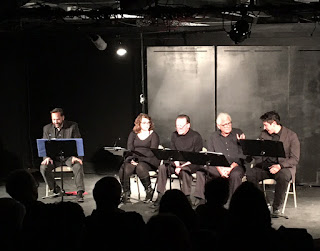 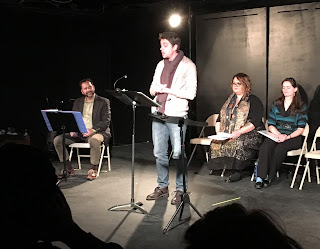 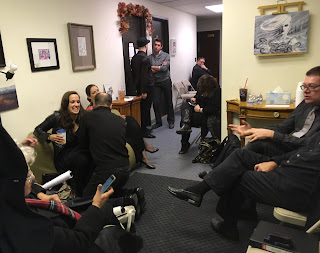 Videography by Will Burcher, 3rd I Media

Lauren Arnest (writer The Notorious Nugget) has been writing librettos and lyrics with composer husband Mark since 1997. Works include All About Love (1997, with Murray Ross), Pike’s Dream (2006), and Iron & Gold (first act, 2011).  The Notorious Nugget (2015) is a musical melodrama featuring a gold chunk shaped like a horse’s patootie. Lauren studied law before boredom drove her to the theater.


Mark Arnest (writer The Notorious Nugget) is music director at All Souls Unitarian Universalist Church and also teaches music theory, music history, composition, and piano at the CS Conservatory. His compositions have been performed by the Chamber Orchestra of the Springs and the Colorado Springs Philharmonic, and his Ludlow: Four Scenes for Orchestra was a finalist for the 2016 American Prize in Composition. He has created music for numerous local theatre productions, most recently Theatreworks' 2016 production of Girl of the Golden West.


Deborah Brewer's (stage manager) first stint in stage management lasted less than a week, when during her high school production of West Side Story, the untimely illness of a mezzo soprano required her to leave her post and step in as Consuelo. More recently, Debby was stage manager for the world premiere of Todd Wallinger's The Last Radio Show, in 2015, and for the first Thespiana production in 2016. She is thrilled that she still gets to play at theatre even as an adult.

Debby invites you to check out her recent project, Welcome Friends: A Bold-Lined Coloring Book for Adults, available now at Amazon.com.


Chuck Cabell (writer Come Here Often?, Date-2-Mate) Following a 30-year career in the Air Force, nine years as a consultant, and a number of years active in the music world (C.S. Chorale; Amateur Pianists International; docent for the Philharmonic; board member of the Chamber Orchestra of the Springs), Chuck has turned to writing and producing plays. After a great success with Thespiana 2016, he is working hard to make Thespiana an essential part of the Colorado Springs annual theatrical scene.


Ashley Crockett (Parental Controls) has performed in genres spanning Shakespeare to modern comedy and performance poetry. Recent roles include Becky in Hoarders for Craft CPR #4, Ruby in the Best of the Fest/Keeping Up Appearances and Miss Prism in The Importance of Being Earnest at Millibo. She has also been involved in a few short films lately: St Clara of Corona for Bucket List Productions, The Genie for It’s Rayning Productions, It Is Written for Hero Plate Productions & MJW Productions and The Arrangement for Treble Peak Productions. Ashley is thrilled to be a part of this fabulous cast!


Warren Epstein (MC, narrator, director Come Here Often?, writer/director Parental Controls) is a local actor, director and playwright. His plays have been produced at the Millibo Art Theatre and Craft Theatre, and he has written and directed for a number of staged readings for Thespiana.


Phil Ginsburg (writer Flush) is a playwright/performance poet whose work has been seen in Colorado and New York. His musical, Almost Jerusalem, written with composer David Corder, was showcased in the Springs in June 2016. Look for the short film version of his play St. Clara of Corona featuring all local talent from the Springs in early 2017.


Nicole Goeke (Date-2-Mate) has acted in previous theatre productions with Funky Little Theatre, Theater'd'art, Craft, and a few others. This is her first time in Thespiana and she is quite honored and thrilled to be a part of such a great show and cast.


Elizabeth Kahn (Flush, Parental Controls) is thrilled to be involved in another year of Thespiana!  Past theater performances include Star Bar, the MAT, and the Black Box. Elizabeth teaches high school English, enjoys reading, hiking, and practicing and teaching Yoga.  She would like to thank her family for their continuing support.


Roy Kieffer (Come Here Often?, Keeping Up Appearances) started performing as an acrobat and opened for Frank Sinatra. Was an Acrobat in Follies Bergere in Las Vegas. Lance Burton magic assistant performing for President Regan and on the Johnny Carson Show. Acted in local, regional and national commercials, Industrial Films, TV shows and Movies. This is his second participation with Thespiana.


Greg Lanning (Flush, Parental Controls) has performed in the Colorado Springs theater scene for over 25 yrs, including Theatreworks, Star Bar, The FAC and many other small ventures.  He is pleased to be a part of Thespiana 2017. When not working in show business, he works in the mental health field. He thanks you all for supporting local theater!


Hannah McCullough (Come Here Often?, Keeping Up Appearances) is excited to make her debut with Thespiana! She is currently attending PPCC studying theatre. As a member of Springs Ensemble Theatre, she has recently tackled the role of co-producer in SET’s OPUS. Thanks to friends and family for the love and support!


Ken McKay (sound/lighting) has been in plays, musicals, and operated sound boards for radio broadcasts, and currently has a music show on KCMJ 93.9 FM and mixes for a talk show.


Mike Miller (Keeping Up Appearances, Parental Controls) This is Mike's second turn at Thespiana. Other venues around town include MAT, Craft Theatre, FAC, Star Bar and SET. In his non-theater time he enjoys full contact nude chess, extreme hedonism and puppies when paired with a nice Malbec.


Beth Clements Mosley (director Flush) is the artistic director of Star Bar. Directing Phil Ginsberg's work is a favorite pastime of hers. She loves her husband. Also dogs. Enjoy the show.


Désirée Myers (Come Here Often?) acts sometimes but mainly spends her time trying to keep her sanity. She's a company member of Funky Little Theater Company and was last seen in Funky's The Bold, The Young, and The Murdered. Love you, Mom.


Sam Suksiri (Come Here Often?, Keeping Up Appearances) is thrilled to perform for the first time in Thespiana. Previous roles with the Colorado Springs theater community include Jimmy in The Last Radio Show, Willum Cubbert in The Nerd, and Justin in Dearly Beloved. Before moving to beautiful Colorado, Sam lived in Los Angeles and studied at the Upright Citizens Brigade Theater.


Robert Tiffany (Come Here Often?) is enjoying being retired as an electrical engineer at Honeywell, as he gets to spend (most of) his time with his son, Mike. While Robert doesn't "tread the boards" much anymore, he enjoys doing these Thespiana readings, as they allow him to at least exercise his acting chops.


Jennifer Underwood (Date-2-Mate) is new to the acting world. Her acting debut was as Maggie in the Funky Little Theater Company production of Timothy’s Carol. Date-2-Mate is her 2nd performance. She hopes to learn as much as she can from each performance and to continue performing and growing as an actor. She firmly believes “It’s never too late to be who you might have been.” If she’s not working, acting, or being a mom, you’ll find her doing the Incline, crocheting or practicing Yoga.


Sallie Walker (Come Here Often?, director Date-2-Mate) appeared in Thespiana 2017 and returns this year to act and direct, as well.  A theater "lifer", she enjoys working with our local theater community in all capacities. Thespiana is unique, in that it is the only annual production of staged readings for local playwrights.  It's a vital link in showcasing our local talent. And Sallie is all about that!