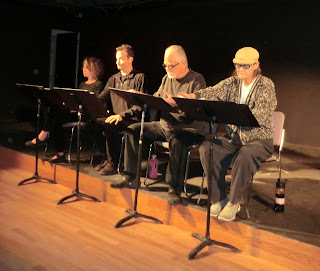 Thespiana 2016 featured five plays by local playwrights Chuck Cabell, Warren Epstein, Mark  and Lauren Arnest, and Jeff Schmoyer. Warren Epstein and the fabulous Eve Tilley split the directing tasks. Opening night, Saturday, February 27th, was sold out, with the Sunday matinee on the 28th getting close to a full house. The audience seemed pleased with the plays, laughing and applauding more than politely. All in all, an outstanding weekend.

The theme of Thespiana 2016 was "gray comedies." The first half of the festival was consumed by Chuck Cabell's Diabolus ex Machina. After intermission, A Priest, a Rabbi, and a Horse..., also by Chuck Cabell, The Secret Origin of Race, by Warren Epstein, Back from the Dead, by Jeff Schmoyer, and Good Ommin', by Mark and Lauren Arnest, were presented.

Each play was performed as a staged-reading; that is they were rehearsed in advance, and enacted from chairs whilst the actors read from scripts. This leads to a shorter production time, with the story being acted out primarily in the audience member's head. The chosen plays worked very well for this kind of presentation as not a lot of action or props were called for

Introduction to Thespiana 2016, and Diabolus ex Machina, by Chuck Cabell

A Priest, a Rabbi, and a Horse, by Chuck Cabell

The Secret Origin of Race, by Warren Epstein

Back From the Dead, by Jeff Schmoyer